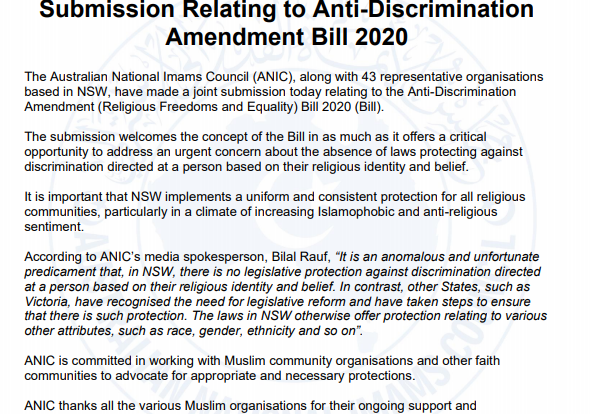 The Australian National Imams Council (ANIC), along with 43 representative organisations based in NSW, have made a joint submission today relating to the Anti-Discrimination Amendment (Religious Freedoms and Equality) Bill 2020 (Bill).

The submission welcomes the concept of the Bill in as much as it offers a critical opportunity to address an urgent concern about the absence of laws protecting against discrimination directed at a person based on their religious identity and belief.

It is important that NSW implements a uniform and consistent protection for all religious communities, particularly in a climate of increasing Islamophobic and anti-religious sentiment.

According to ANIC’s media spokesperson, Bilal Rauf, “It is an anomalous and unfortunate predicament that, in NSW, there is no legislative protection against discrimination directed at a person based on their religious identity and belief. In contrast, other States, such as Victoria, have recognised the need for legislative reform and have taken steps to ensure that there is such protection. The laws in NSW otherwise offer protection relating to various other attributes, such as race, gender, ethnicity and so on”.

ANIC is committed in working with Muslim community organisations and other faith communities to advocate for appropriate and necessary protections.

ANIC thanks all the various Muslim organisations for their ongoing support and endorsement of the submission.