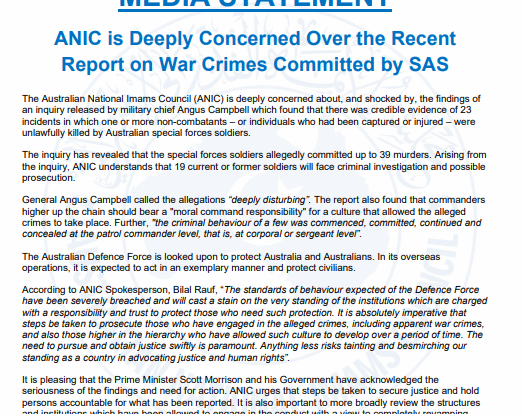 The Australian National Imams Council (ANIC) is deeply concerned about, and shocked by, the findings of an inquiry released by military chief Angus Campbell which found that there was credible evidence of 23
incidents in which one or more non-combatants – or individuals who had been captured or injured – were unlawfully killed by Australian special forces soldiers.
The inquiry has revealed that the special forces soldiers allegedly committed up to 39 murders. Arising from the inquiry, ANIC understands that 19 current or former soldiers will face criminal investigation and possible prosecution.
General Angus Campbell called the allegations “deeply disturbing”. The report also found that commanders higher up the chain should bear a “moral command responsibility” for a culture that allowed the alleged crimes to take place. Further, “the criminal behaviour of a few was commenced, committed, continued and
concealed at the patrol commander level, that is, at corporal or sergeant level”.
The Australian Defence Force is looked upon to protect Australia and Australians. In its overseas operations, it is expected to act in an exemplary manner and protect civilians. According to ANIC Spokesperson, Bilal Rauf, “The standards of behaviour expected of the Defence Force have been severely breached and will cast a stain on the very standing of the institutions which are charged with a responsibility and trust to protect those who need such protection. It is absolutely imperative that
steps be taken to prosecute those who have engaged in the alleged crimes, including apparent war crimes, and also those higher in the hierarchy who have allowed such culture to develop over a period of time. The need to pursue and obtain justice swiftly is paramount. Anything less risks tainting and besmirching our
standing as a country in advocating justice and human rights”.
It is pleasing that the Prime Minister Scott Morrison and his Government have acknowledged the
seriousness of the findings and need for action. ANIC urges that steps be taken to secure justice and hold persons accountable for what has been reported. It is also important to more broadly review the structures and institutions which have been allowed to engage in the conduct with a view to completely revamping
these institutions. It is also important that these steps occur in a timely manner and not be allowed to drag on for years.
END…
You may contact ANIC’s Spokesperson, Bilal Rauf in relations to this statement on
(02) 8377 4178 or spokesperson@anic.org.au.