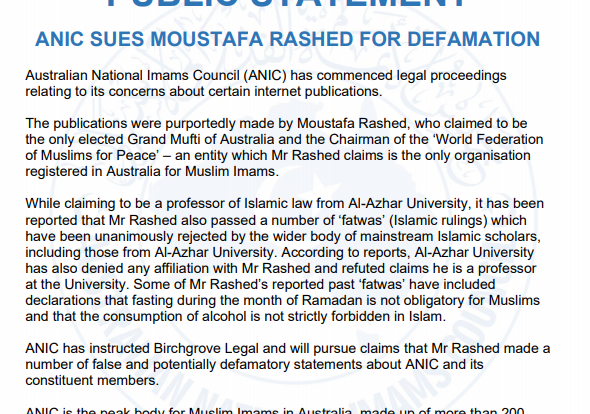 The publications were purportedly made by Moustafa Rashed, who claimed to be the only elected Grand Mufti of Australia and the Chairman of the ‘World Federation of Muslims for Peace’ – an entity which Mr Rashed claims is the only organisation registered in Australia for Muslim Imams.

While claiming to be a professor of Islamic law from Al-Azhar University, it has been reported that Mr Rashed also passed a number of ‘fatwas’ (Islamic rulings) which have been unanimously rejected by the wider body of mainstream Islamic scholars, including those from Al-Azhar University. According to reports, Al-Azhar University has also denied any affiliation with Mr Rashed and refuted claims he is a professor at the University. Some of Mr Rashed’s reported past ‘fatwas’ have included declarations that fasting during the month of Ramadan is not obligatory for Muslims and that the consumption of alcohol is not strictly forbidden in Islam.

ANIC has instructed Birchgrove Legal and will pursue claims that Mr Rashed made a number of false and potentially defamatory statements about ANIC and its constituent members.

ANIC is the peak body for Muslim Imams in Australia, made up of more than 200 member Imams from each State and Territory.  ANIC is disappointed by the publications purportedly made by Moustafa Rashed. It takes all such matters seriously and is appreciative that Birchgrove Legal has able to assist on short notice.